Community Opening of the Legal Year 2017 – Thank You!

Posted in Past Events on the 1st of February 2017

On 30 January 2017, the yearly ICJ Victoria Community Opening of the Legal Year was held at Waldron Hall, at the County Court of Victoria, with over 100 members of the legal and broader community attending.  We filled the County Court with song and the sound of voices, both of the young and advocating the rights of the young.

Click on this link to see this year’s program

We were extremely fortunate to have a number of excellent guests speak at this year’s event. 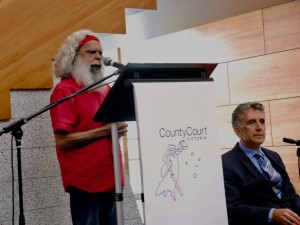 Bunurong man, and Victorian Senior Australian of the Year 2016, Uncle Jack Charles, welcomed us to country. 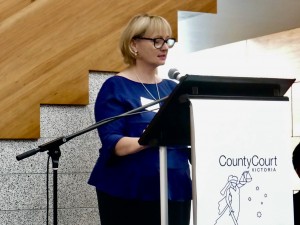 Amanda Chambers spoke on the importance of maintaining a rehabilitative system for treating youth offenders.

Passionate, inspirational, and idealistic, our young speakers from the Skyline Education Foundation, Mary Zhang and Andreas Zakhari, reminded all those attending to “stay real”.

We were pleased to present the 2017 John Gibson Award to The Hon Ron Merkel QC. 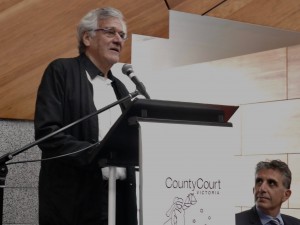 Ron Merkel has devoted much of his working life to the cause of human rights, refugees and public interest issues.  Both before and after his time as a judge of the Federal Court, he has donated very significant time to pro bono cases for worthy causes.

Since retiring from the bench, Ron has devoted his considerable energies and talents to helping people otherwise outgunned in litigation in a huge variety of worthy causes.  Not all his work is known publicly.  ICJ Victoria ‘briefed’ him to advise on behalf of some Fiji lawyers concerning the deteriorating situation in Fiji, when legal practitioners were uncertain whether to practice before the highly biased courts being set up by the military dictator there.

Listing his pro bono appearances in the High Court is no easy task.  He appeared in the Williams chaplaincy challenges; he led Richard Niall in the Wurridjal case; he appeared in the Jack Thomas case.  He has appeared in numerous refugee cases, most recently the case of the 157 Tamils held for a month at sea.

Ron hardly needs introduction to the legal community.  He is extremely well recognized and of enormous standing.  Ron is so well recognized as a public interest pro bono advocate that an award has been established in his name by the Victorian Bar Pro Bono Committee – the Ron Merkel QC Award for pro bono work undertaken by barristers who are more than 15 years’ call or silks.

Ron has a lifetime of worthy achievement to be recognised.  It is fitting that some small part of that recognition include this award. 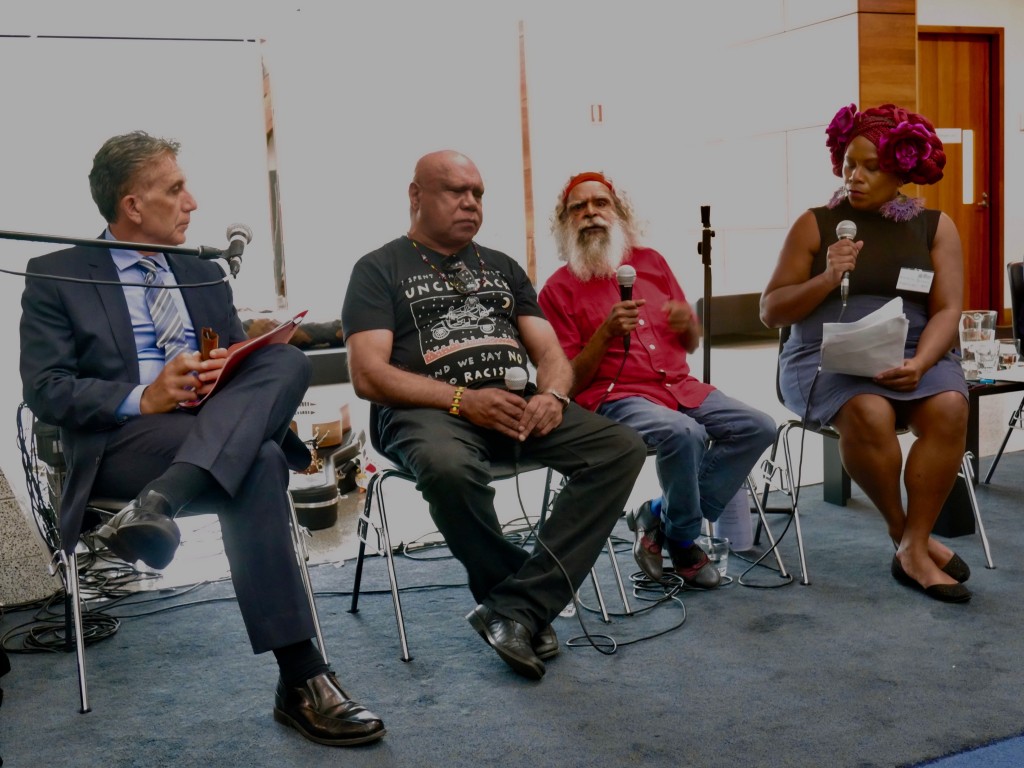 Namila Benson hosted a conversation between Uncle Jack Charles and Uncle Archie Roach about the Archie Roach Foundation, the damage that defunding of Community Legal Centres is doing to Aboriginal Youth, and the importance of Aboriginal leaders visiting young Aboriginal offenders.

Thank you to all who attended the 2017 Community Opening of the Legal Year. We would also like to thank the following people for their support:

Click on this link to see this year’s program